I love the movies. I always have. I remember way back when I was 10, and my mother would give my brother and I a few pounds each to go and see the latest Disney film or similar children’s guff while she headed off to the supermarket. It was great. The feeling and atmosphere you got from sitting in front of the big screen, waiting to get lost in an imaginary world for 90 minutes.

Years later, I still have that feeling. These days, however, I use my own money and go with friends, regardless of whether my mum is at the supermarket or not. But the feeling I get and the atmosphere I sense is still the same. The initial smell of burnt popcorn and overcooked hotdog sausages as you enter the lobby, the sound of ice cubes filling up those huge buckets that hold litres of fizzy juice, kids gawking at the huge cardboard cut out of Indiana Jones and the endless other posters and promotional cardboard that litters the walls and floor space. You just know your at the movies.

Doesn’t everybody feel the same? Don’t we all share the same passion and love for movies? Don’t we all visit the cinema and spend our hard earned cash on very expensive tickets and ridiculously overpriced confectionary because we want to and sit quietly for 90 minutes staring at the screen as we are entertained and lost in that imaginary world or adventure land? The answer to that is: No.

Some people believe that going to cinema is a fantastic place to meet with friends and sit in the dark, in single file to talk about that party they all got wasted at last Saturday night. Inconveniently, the venue that they chose as a meeting place, suddenly starts to play flashing images on the screen and accompanies it with loud music and dialogue. Naturally, the friends talk louder, so that they are able to hear one another. How rude. We can hardly hear ourselves think in here.

There are also an amazing amount of people who visit the cinema, buy their tickets and refreshments, find the theatre that their chosen film is playing in, and then decide for 15 minutes where to sit. After finding a seat, they sit through the 80’s music played over the speaker system, they watch all of the commercials and trailers. They then watch some more of the cinemas in house screening, reminding us not to smoke and to switch our phones off. Finally, the films classification board is displayed . Everyone is settled and ready. That’s fine, isn’t that what everybody does when they visit the cinema? Oh no wait, that person has decided that they forgot to buy a hotdog almost 25 minutes ago and get up and sneak, shoulders hunched, back out into the foyer, after causing the entire row to raise their knees, twice!

I recently had another encounter at the cinema. This one involved a film that had been out for a while which was screened in one of the cinema’s smaller theatres. Not many people, 8 in total, including myself and my friend. Although, we did have a late arrival. A loner in a red tracksuit, loaded with a litre of coke, nachos, a hotdog and a bucket of maltesers. Of course, as I just mentioned, this particular theatre was literally packed!(not!) So of course there was nowhere, at all, for this guy to sit except from directly behind us. The next 15 minutes consisted of my friend and I listening to nachos being chomped and a hotdog being gulped down while they were both washed down several times with rivers of coke. But it didn’t end there. Obviously very satisfied with his evening feast and comforted the by the warn and relaxing atmosphere provided by the cinema, what else is a guy to do, but take a nap….and snore uncontrollably. Luckily, I was armed with some maltesers myself, and after 5 minutes of listening to sleeping beauties sinus problems, he was abruptly awakened by a runaway chocolate ball. He remained awake for the remainder of the showing.

I know that there will be many people out there nodding their heads in agreement with me. Others will be shaking there heads in disagreement, stating it’s a free world, we can talk and sleep when and where we want. This is true. But surely we all have enough common sense and self control to realise when it is appropriate to conduct these actions.

So to all of you out there who insist on irritating the living daylights out of people who have a genuine enjoyment from visiting the cinema, I have set out a few suggestions for you, to stop you ‘getting our goats!’

1. If your friends from the other side of the planet are on their first day of visiting you- go to a bar or a restaurant. You can talk and laugh as much as you like and nobody will care.

2. If your on a first date, rent a DVD, cook dinner and cosy up together in the privacy of your own surroundings. Remember, some movies shown at the cinema are for younger viewers, too!

3. Your best mate normally calls you around the same time every night. However, you’ve arranged to see a movie tonight with your boy/girlfriend. Call your mate first and let them know you can talk right now or later, because, of course, you will inevitably forget to switch your phone off in the cinema and if you are a real idiot, you may even answer it!

4. Your tired, its been a long day at work and your on the early shift tomorrow. A bit of advice: go to bed and watch a DVD in there. Why pay good money on travel and a box office ticket, just to miss the entire show?

To those of you who follow these simple steps, you will keep the true movie goers happy and you will certainly save yourself a lot of money and embarrassment. Furthermore, you may save yourself from even more painstaking embarrassment, when you suddenly carryout one of the deadly cinema sins and you’re reported to the usher. Who, quite rightly so, bans you from the establishment for unsociable behaviour.  Most of all, however, it really, really gets my goat! 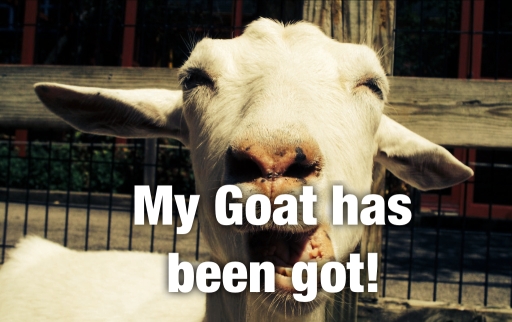 4 thoughts on “That really gets my goat! Part 1: Cinema Commandos”